How to Buy a New Handgun 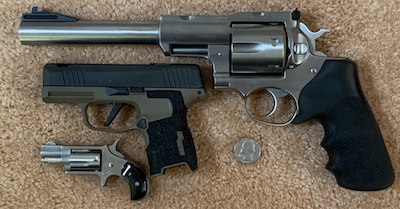 In just the first six months of 2020, approximately 19 million firearms were sold; more than double during the same period a year later.

75% of my handgun customers and students are new gun buyers and many have never even held a firearm before. This leads to two dangers; purchasing the “wrong” handgun or mishandling a handgun that they already have purchased.

The purpose of this article is to offer up some suggestions to someone who wishes to purchase a handgun, either for sport or protection. I am not going to address training, which I believe every new firearms owner should have, except for listing the three inviolable rules for safe handling of a firearm.

Newton’s law states that for every reaction, there is an equal and opposite reaction. For a handgun, this means that as the bullet leaves the barrel, the firearm will push back against your hand and therefore your arms and shoulders. Because the barrel usually is higher than your grip, your hand acts like a fulcrum and the handgun tries to pitch upwards. Newton also said an object with larger mass will move less than an object of smaller mass.

Assuming that the same cartridge is used, this means that a heavier firearm will recoil less than a lighter handgun. So why doesn’t everyone purchase the heaviest handgun they can find? There are multiple tradeoffs. A heavy gun takes more muscle to hold it up and keep it on target and if you plan to carry a handgun on your person for self defense, it can get very heavy indeed.

I have seen several students come through the door with super-light titanium- or scandium-framed revolvers meant for off-duty use by law enforcement officers which are designed to fire .357 magnum loads and then watch as they feel the pain of shooting a “pocket rocket” after ignoring my admonitions.

Because they chose the wrong tool for the job, some will lose the enthusiasm they had when they walked into the range. There are many small but heavy handguns in stainless steel available that may be a better solution for a beginning shooter.

There literally are hundreds of firearms cartridges available, although a much smaller number are used in handguns. The most popular in rough order of energy leaving the barrel are the .380, 9mm, .38 special, .45 ACP, .40, .357 magnum, .44 special and .44 magnum. The .380, 9mm, .38 special and .357 bullets are all the same diameter and it is the case length and the amount and type of powder inside the case which makes a difference in the amount of energy they deliver. Handguns in .380 and 9mm are available which can fit inside an average palm which makes them ideal for concealed carry applications.

In addition to the “standard” loads, which are agreed upon by firearms and ammunition manufacturers, +P and +P+ loads also are available. These “hotter” loads develop more pressure behind the bullet which means more energy. However, they also require a firearm which can handle the additional pressure.

Handguns have a number of springs which interact with the shooter. For a semiautomatic pistol, these will be the recoil spring which returns the slide to a closed position after the gun is fired, the slide stop spring which holds the slide stop down while the gun is being fired, the hammer spring which drives the hammer forward onto the firing pin and the magazine release spring. For revolvers, these are the hammer spring, the cylinder release spring and the ejector spring. If you are unsure what any of these parts are you can search for the terms “parts of a pistol” and “parts of a revolver.” The strength of each spring varies between different brands and models.

Handguns designed for concealed carry tend to be smaller and lighter. With some designs, you may not be able to get more than a couple fingers on the grip, with your ring finger and pinky floating at the bottom of the grip. Depending on the cartridge that the handgun is designed for, you might not be able to keep hold of it at all without substantial practice.

Those of us in California and several other states have restrictions on who can buy a handgun and what we are allowed to buy. The California Roster of Not Unsafe Hanguns is a listing of around 600 handguns that we can buy new from a dealer. We also need a Firearms Safety Card (FSC) which solely allows us to purchase a handgun. Some of my students believed that the FSC was required to take their firearm to the range or allowed them to carry a firearm on their person, which is not the case. Once you have purchased a firearm, your FSC can be put away until your next purchase. There is no reason to carry it on your person unless you drop into gun dealers at a moment’s notice.

Before buying a handgun, ensure that it fits your hands and that you can operate all of the controls comfortably. If you cannot overcome any of the springs, you may need to look at something different. Shooters with smaller hands and little strength may have better success with a revolver. Novice shooters should stay away from lightweight firearms (which recoil more than heavier firearms) and those that use .40, .357 magnum, .44 special and .44 magnum as well as +P and +P+ ammunition. A revolver which can use .38 special as well as .357 is fine because you can start with the less powerful cartridge then use the stronger cartridge as your training progresses.

As a newbie be aware that there are some seasoned shooters who know it all and will tell you what handgun you just have to buy. Don’t be rushed, don’t be afraid to do your own research and don’t buy a handgun because it is the last one on the shelf. Take your time.

Safety comes first, so always keep the 3 laws in mind when you are trying out firearm in a gun shop. When anyone hands you a firearm, it is your responsibility to ensure that it is unloaded. If you are unsure how to do this, ask the clerk behind the counter. And finally, safely practice as much as possible so that you become intimately familiar with your firearm. Stay safe, stay healthy.